Joy for the day

Well, since my last post is full of self-pity, I thought I would throw in a lovely scene that did not get into the sunset pix post.  I am still obsessing on long winter shadows on the snow......

I took this one on Sunday afternoon during my long walk.

I sort of am loving it.

I have been bouncing around with the scenery for this play- running the gamut from excited to terrified to clueless to irritated, and that was just after school yesterday.  I have a wonderful group of students helping me, let me be clear on that!  HOWEVER, they are goofy after school.  I'm just sayin'.  And now I have to tell the juniors and seniors not to yell at the freshmen!!  SHEESH people.

They actually laughed at me when I told them that they all would be gone next year and I need the new people when they leave.  I don't think they thought about it in quite those terms.


I am going through my hardest part of the  school year.  End of the third quarter is tough, long weeks, rotten weather, cooped up kids.


Spring sports are here, ready to take my workers away after school.  Seniors are getting kooky, the stress of getting everything together for a production is getting to the cast and the crew. And the director and the queen of the stage. I will spend a huge amount of time at school for the next 2 weeks, and then grades are due right after the play is done.  There will be a couple art shows that go up soon after the play is finished, as well.....  Along with my grade school teaching and lack of time in that school, it is going to be a tough spring for me.  But, I will get through it, one task at a time.

So Little Shop has a set stage, not much moving to do this year, not like last year had!  But this one will have it's own little set of challenges.  Most of them involving Audrey- do you know how hard it is to keep people out of the mouth of the giant plant?  I'm sort of wanting to go take a nap inside of her, myself.


Here are a few shots of taping and painting.  This will all look so totally different in one. short. week.  Full dress and makeup rehearsal next Monday!

Which reminds me, I have to go and check out the makeup supplies.....  and on I go.

Somedays, you have to search a little more for your joy!  It's there, keep looking.
Posted by debio at 5:39 AM 1 comment:

So the MA and I walked down to Smith Lake County Park at the end of our road.  It was the second time today I had been down the road- the first being when Number-one son and Sarah Grace, I,  and the dog went for a short walk.  They wanted to get the energy out of this pup before the 4.5 hour drive.  I also, in-between, went on a really great walk around the big block- 6.6 miles.  Whew, you'd think that would have been plenty.  But fortunately, I am never one to turn down a walk these days and off I went, camera in hand.

The clouds turned out to be those very interesting wavy, ripply clouds that you don't get to see every day. Here are some of the best ones from tonight, plus an early morning full moon pic from last Friday. 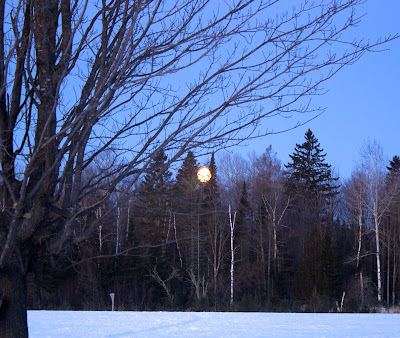 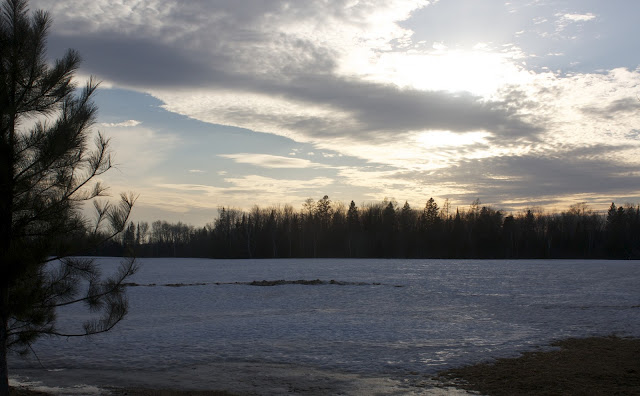 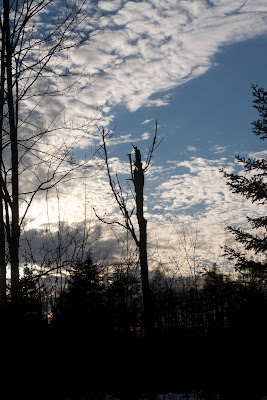 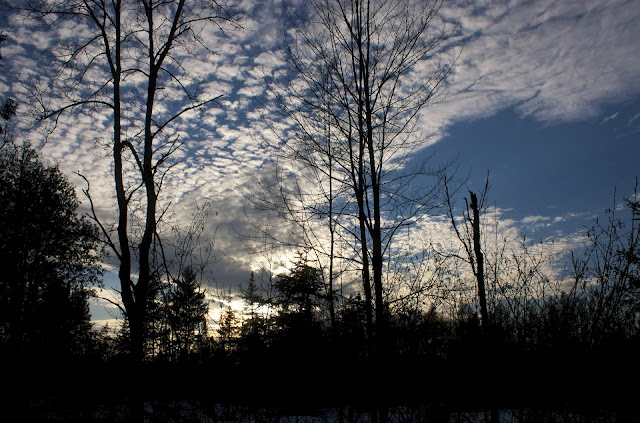 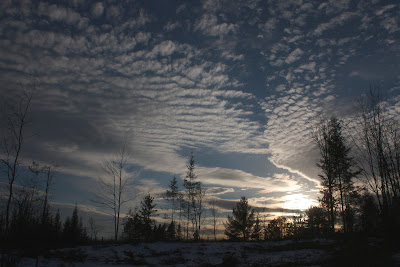 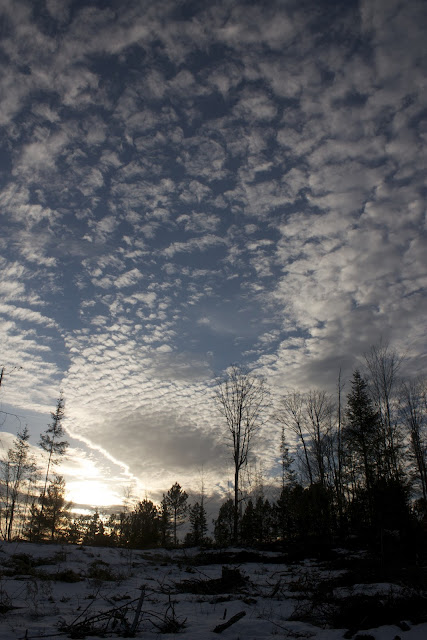 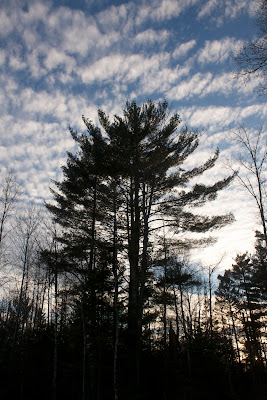 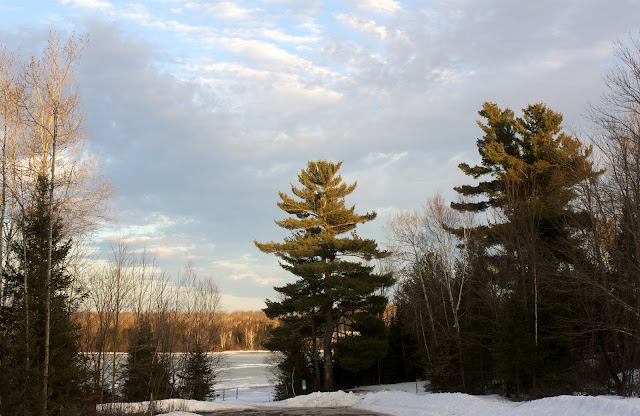 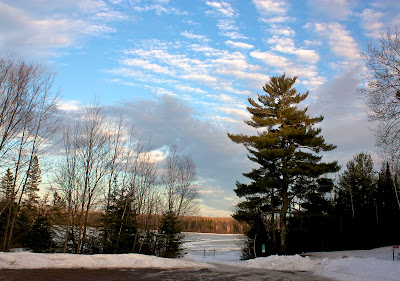 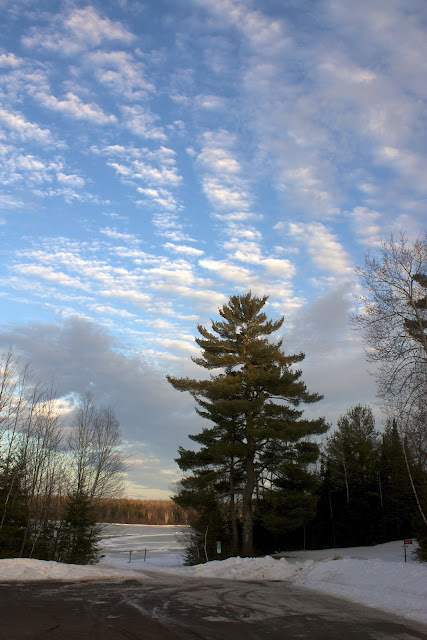 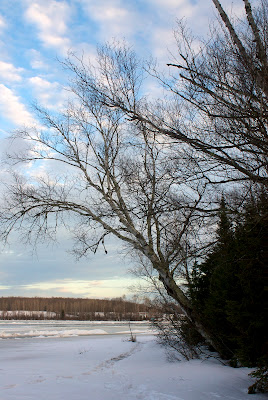 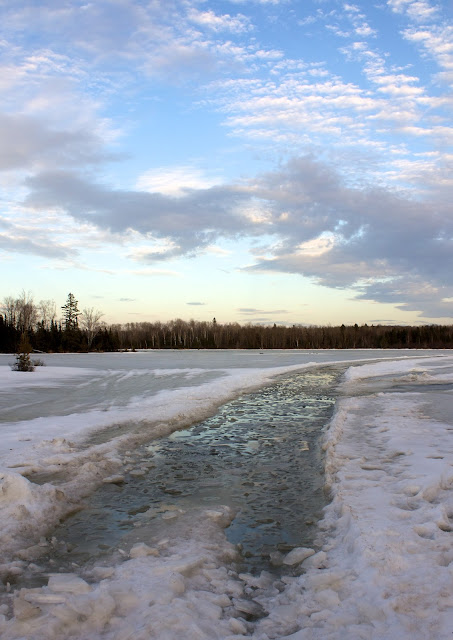 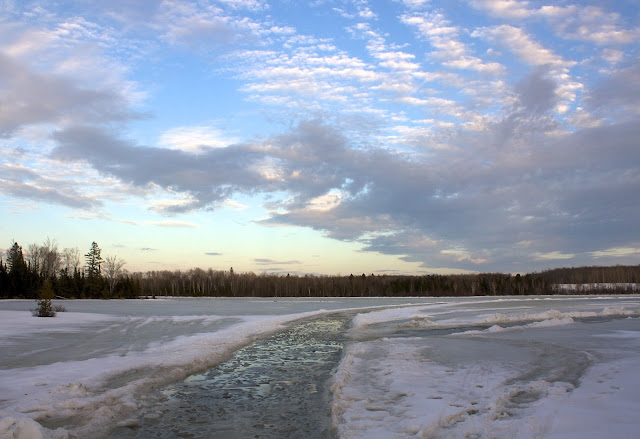 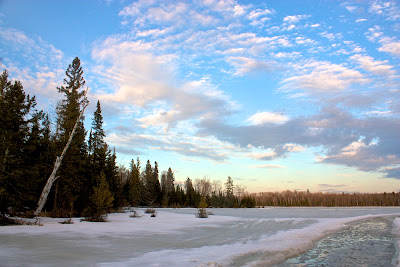 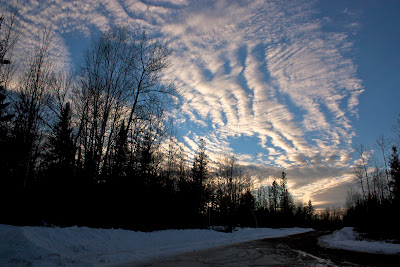 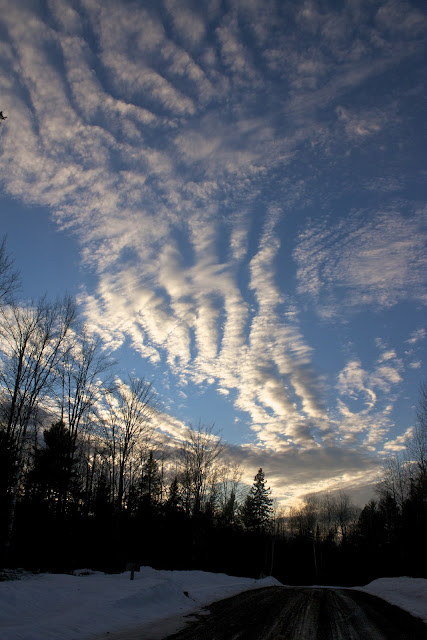 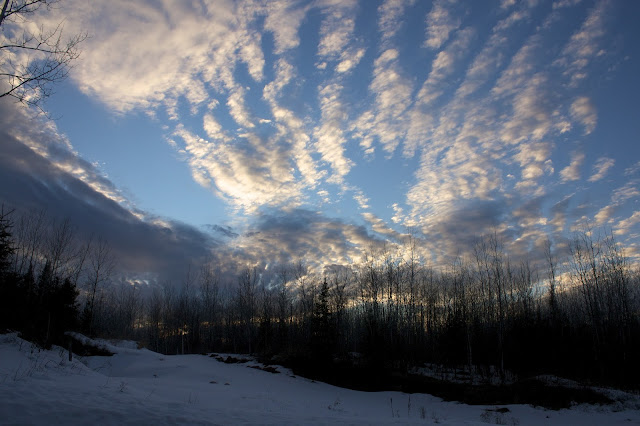 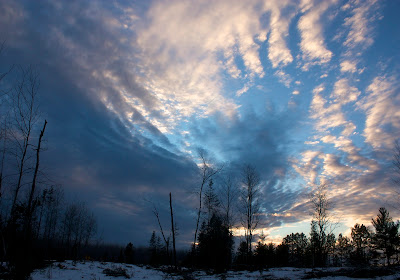 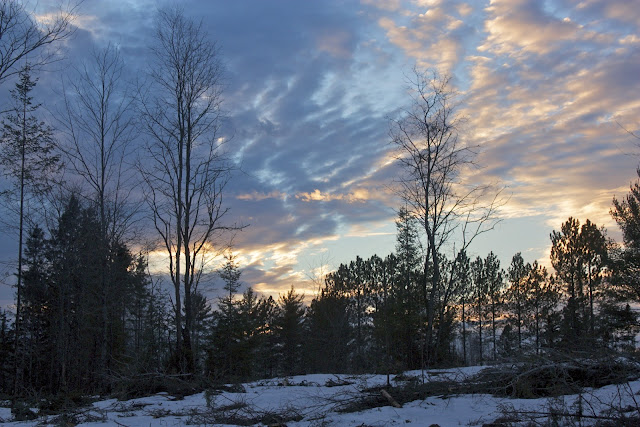 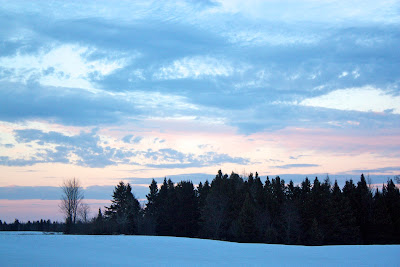 So, make sure you look out your window and see what you can see- maybe you will find your joy!
Posted by debio at 10:03 PM 2 comments:

What I did over my spring vacation......

What I Did Over My Spring Vacation

So, it was really nice of the weather to cooperate with my trip to Wausau to do a little shopping.  I of course like to shop with a friend, and Luann is the perfect traveling companion.  She and I talk the entire time during our travels, enjoy the same sorts of things and I have come to discover that Luann is a wonderful stylist and personal shopper!  After picking out lots of things to try on, she kept bringing things for me to try on!

Here are a few things, some I did buy and some I did not.  It was so much fun to try clothes on that fit well and looked good on me.

Seriously, if you don't know why Debi had a pampering day you have not been paying attention!

I planned for this day a couple weeks ago!  I spent lots of time at the gym today, in many various rooms!  It was so much fun.

No pix of the 2 hours I spent working out (awesome) or the HOT STONE MASSAGE!!!  (even more epically awesome) - It was a wonderful way to spend the morning!!!

The massage was followed by a nice little poor man's  lunch at my favorite diner- The Pal.  While sitting there with the MA and Joe the Builder, there was some activity out on the sidewalk nearby.  There was a massive snowpile right on the sidewalk, which I guess wasn't too much of a surprise.  But what WAS a surprise is the fact that a guy was  shoveling the snow off of the sidewalk into the street- right in front of my car!!! And I was parked in!  Fortunately, the vehicle behind mine left before I was done.  You just never know!

At any rate, this wasn't the end of my day, I went BACK to the gym and had a glorious little pedicure later.  ahhhhhhhhh!  It was a good day to be Debi!  :)

CHAPTER 4: Company for the weekend

Saturday brought Number 2 son, his wonderful gf, Sarah Jane, and of course Ruger and Toby!  What a nice time we had.  Lots of goofing around, outdoor hiking through the snow, shooting of catapults through the house.....  Lol, all kinds of things. 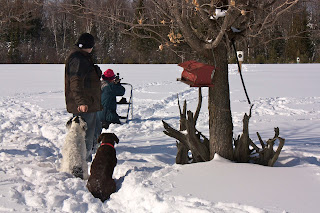 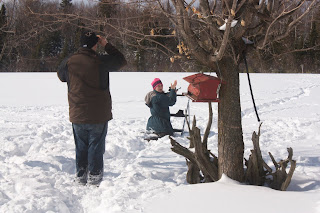 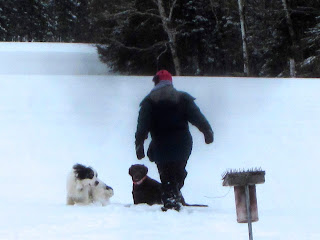 Sunday found us hiking back to the cabin where the MA and Bob the Barber are working on the spiral staircase.  Next step is the railing to tie the whole thing together. 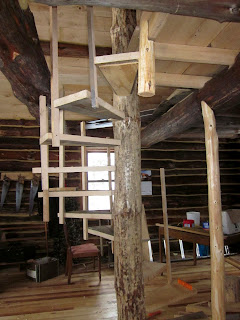 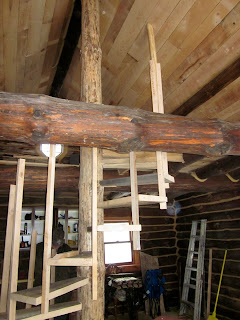 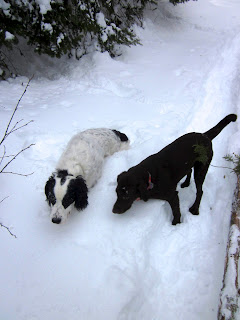 So a great friend of mine on the loseit site gave me a recipe for an awesome, different pizza!  It is a pizza without tomato sauce and it is a bit unconventional in it's ingredients.  So I made a whole wheat crust, then used the second crust to make a more conventional pizza plus the White pizza!

They were both really good!

I have been working on this for a while!  I was told that I could bench press over 100 pounds, so I have been trying that.  A month ago, I attempted and didn't quite make it.  3 weeks ago, I had been sick and had an epic fail.  So after working really hard including freaking pushups (drop and give me 50!) I finally accomplished it!  Not only that, but I went beyond the 105 to 115!  I am so happy!!
I went on to finish my chest and tricep day with some adrenaline (and am feeling the effects of it today) and then ran again.  I have been working on running for several months. It began with little spurts in my walks, every 2 weeks or so.  Then I progressed to once a week.  Well, lately I have been on a streak, so I planned to run 2 times a week and work up from there.  I have skipped that completely and am running (intervals) every other day now!  If you knew me from before, which many of you did, running and I were not on speaking terms.  Maybe to the phone!  But that's about it!

The amazing thing is how good it feels.  Who knew???

I finished off the day later with a walk in the snow, and had a 1200 calorie burn day!  I have never done that before either.