What I have been up to lately~

I know, it has been a long time since I have written/posted- but sometimes the mood is with you and sometimes it isn't.


Other creative endeavors, or at least time consuming ones, have been more in the forefront of my mind and given my attention.  I have indeed been taking photos and such, and have gone on a couple adventures, but this school year is draining my soul.  Jeez.

So let's see, I spend a lot of time on weekends trying to jam in some gym workouts, some walking and of course the usual house/chores sorts of things that make time go so fast.  I try to balance my time between things I want to do and need to do, but that doesn't always work out the best.

Of course Thanksgiving and Christmas are full of family and shopping and cooking and such- it was super to have all the kids around.  The little ones are such fun and entertain everyone to no end.  The house was full!

What has been keeping me from actually writing of late has been the fact that I have replaced that time with learning/relearning 2 languages and actually practicing piano regularly.  The piano thing, I sort of taught myself to play when the kids were little, and while I was never very good, I got a lot of satisfaction from being able to play with 2 hands- lol.  I can easily read music now, at least for piano, but because it was informal training, I am not good at the technical stuff.  BUT if you don't play for a year or more, you lose everything. So when Christmas came, and I started playing holiday music (for myself, I freeze up around others) I decided to just practice even 10 minutes a day.  Which usually turns into 15 or more minutes.  I decided to continue playing Christmas songs all year and so I will ROCK those suckers next December.  LOL  I do like playing- even if it is badly and for myself.

So the languages thing.  Back a few years ago I started doing a different program to learn Italiano.  You know, because I was going to Italy.  Which seemed like a logical thing to do.  Well if you recall, I felleded and broke my elbows and my motivation to work on the Italian fell by the wayside.  Which is unfortunate.  However, I had the opportunity to use Rosetta this year and so I began the Italian course.  Italian is hard you guys.  Anyway, I love doing it, and a few weeks into it, I happened to be chatting with someone about German.

When I was in grade school, our school had all kids from 4th - 6th grade have weekly exposure to the German language and then after that it was optional.  I remember really begin excited to learn it in 4th grade, though I don't remember very much of those early years.  Other than a few phrases like -Mach die Tür zu und Wie viel Uhr ist es?  (shut the door and what time is it).  Mine was the last class to have it, too, so none of my siblings did.  Anyway, I took German through 12th grade (!) and was totally gypped out of a trip to Germany...  Lets just say that I had to choose between a trip overseas and my first year of college.... ugh.  My mother said she really tried hard to get my father to give in but no go.  Hello years of resentment.  Follow all the rules and graduate in the top 10 of your class and you still don't get rewarded.  But that is truly water under the bridge, and I will just let that one go.  Anyway, after all those years of speaking it, it is in my DNA.

The point of this is that I could have taken German as a minor in college, but chose not to because I was sick of it.  Lol.  I mean seriously, it would have been 12/15 credits.  But that is pretty typical of me, lets branch out to something new and exciting like the romantic language - French!  Oooo lala.  I took French in college- for exactly one semester.  That class was horrifying.  ALL those people knew French, obviously had taken it in High School, or were born talking that way or something.  In case you didn't know- it is NOTHING like German. Not. One. Thing.   I chose to hang out in the art department even more, which was not too much of a sacrifice as you can imagine.

So as I was talking to someone at school randomly about Italian, and I said to them after being asked why Italian, yeah this reminds me of when I didn't take German in college and took stupid French instead.  You would think I would have learned.....  and then I had a moment of clarity.  Why indeed am I not doing German?? So, I am also doing the Rosetta course in German as well.  Which is way easy, except for some of the more complex grammar, which I am regaining slowly.  While the Rosetta is fine, I need to get some traditional text book info so I can figure out how those verbs are conjugated (as she googles textbooks for german).  As a matter of fact that would be helpful with the Italiano as well.  I find it interesting that I have no desire for learning Spanish which would have been a somewhat more logical thing to learn, seeing it is so common in the US, but eh.  I want to go back to Italy FOR SURE and maybe some day a Spanish speaking country- hello Spain and Portugal- might be a possibility.  But I like to veer off of expected paths, so Italian it is.

So these things have been keeping me occupied in the evening, it is just so fun to do something for me and NO ONE else... No relation to art or students or teaching.  It is such a good thing.

Anyway, you guys, I have only been up to Bayfield twice since school started and I would like to say how sad that makes me.... SO sad.  I was up there last weekend with the Mad-English teacher, but that is going to be a different post- a photography sort of post.  The end of 2017 was low in adventures.

I can't say that I have done nothing, though, I have had some fun, and have taken photos and some of those still show up on the channel 9 weather.  Actually I have sold a few photos (I don't know if I have talked about that or not, as I don't feel like reading my previous posts at this point) which still surprises me.  It is pretty cool though.

Have a lovely February and hope you can find some joy in this cold winter.

ETA: At LEAST I have been sleeping better lately, like being able to fall asleep 4or5/7 nights instead of 0 nights like a few months ago.  YAY ME

And to the beach we went!


Portland** was just gorgeous- Oregon and Washington are just beautiful- I am very fond of the Columbia River gorge and it was sad to leave it, but wow was the next stop amazing.  The Pacific Ocean was definitely worth that 1.5 hour drive to get to.  I have to say my compadre and partner in all things travel and I do a DAMN fine job planning these trips.  We really do hit the sweet spot between having an agenda and winging the hell out of it.

**  Yeah that was quite the break in posting from last fall to February! 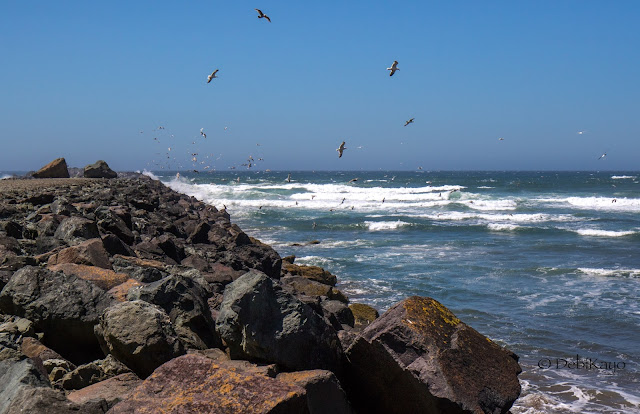 We went through the Tillamook Forest and ended up heading over to the coast and both of us were able to see the Pacific Ocean for the first time.  YAY.
It has been quite a long time since I started this post and since we were in the PNW.  So I have photos and I will outline what we did - not a real lot- cuz, man, we were tired.

We drove to the coast and stopped at a few places on the way to our condo in Rockaway Beach.  There was hiking on some really great trails, and we were overwhelmed (or at least I was) by the sheer power of the ocean.  It was quite incredible.  The waves were just relentless. 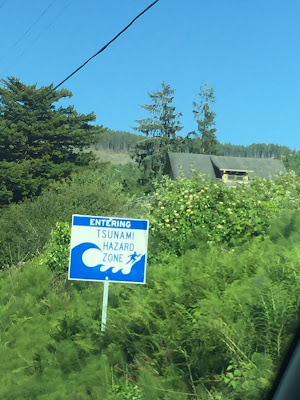 You know what was weird?  Seeing Tsunami danger zone signs while we were over there....  that was weird-

After our sojourns to the edge of land to stare down at the ocean below, we went and collapsed a while on couches and then went on a stroll along the beach.  It was pretty amazing.  And pretty chilly.  It was hot the first day we were in the PNW, and got a bit cooler as the week went on.  It was quite chilly by the ocean, and we are lucky we got out when we did, as there was some pretty stifling weather right after we left. 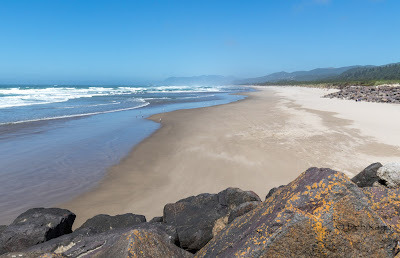 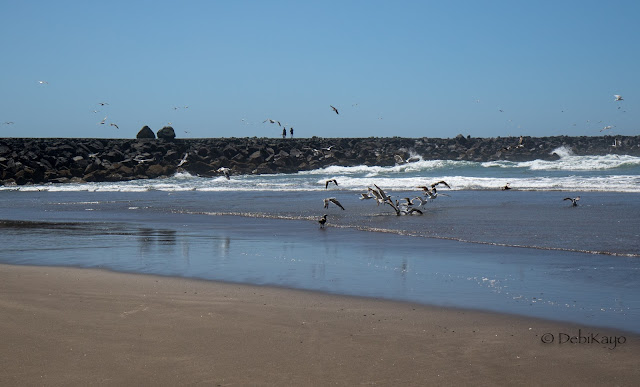 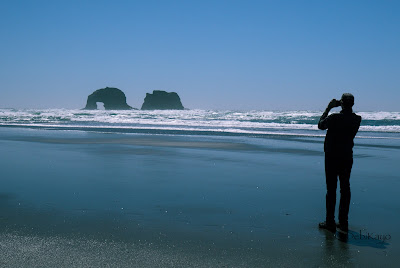 We did get over to Cannon Beach, the idea being get there at low tide and be able to get out to those big ass rocks, but since we are putzes, it sort of worked out.  And there wasn't much of a colorful sunset which was unfortunate....  oh well.  It was marvelous. 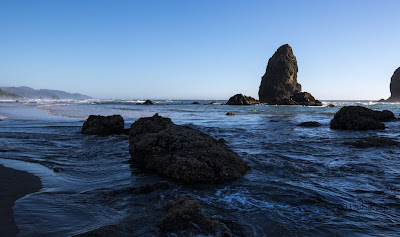 Though the sunset wasn't spectacular, it still was so lovely- we had a perfect view.

We ate in Cannon Beach, at a really nice little pizzeria that night, did a little shopping earlier where some souvenirs in the form of T-shirts and such were procured.  I know we ate breakfast at a cute little coffee shop, but we were on a mission to get to Portland in time for our flight, so we wasted little time.


And of course then I got to ride in a plane again and that is always a hoot!  AND  we had an empty seat next to me, so we had a tiny bit of room to stretch out and dump our (my, it is always my stuff) stuff. 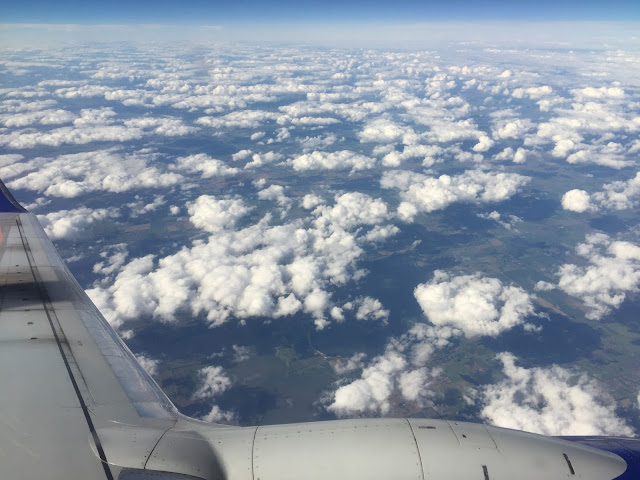 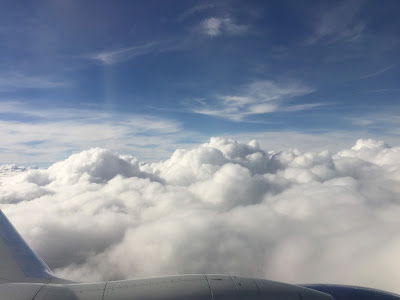 Another awesome adventure in the books!  and I am planning my travels for this summer and it is going to be a humdinger!  Yes I said humdinger....  :)  It is going to ROCK!

And that will be some joy to look forward to as I looked back at this!
Posted by debio at 5:16 PM No comments: