A Cooking Kind of Day!

It's a good thing I didn't actually plan to go anywhere, because I am stuck here.  It snowed hard until about 1 pm, and then the wind started up.  My youngest son came home, and had a little something to eat and then left again.  On the way in, he had to shovel the ridge left by the snow plow.  On the way out, he got stuck NUMEROUS times, but managed to extract himself.  So, here I am, as the Mad Husband took the snow shovel with him.

Therefore, I began working on my first real cooking post.  I have a whole new appreciation for the work that goes into setting up and shooting the steps of a recipe, so kudos to all you food bloggers!  And please forgive my first fumbling attempt- but it was enjoyable at the same time.

I made a lentil soup today, based on a recipe from America's Test Kitchen.  I love this recipe, especially the use of balsamic vinegar in the final minutes of the heating.  I have adjusted a few things, mostly the use of olive oil instead of bacon grease to saute the veggies.  Two reasons:  first, I hate frying bacon and it's mess. Yuck. Second, I try to trim some of the extra calories and saturated fat from the final result.  There is a little bacon in there for flavor, but not the fat.

I began by sauteing the carrots and onions in olive oil. 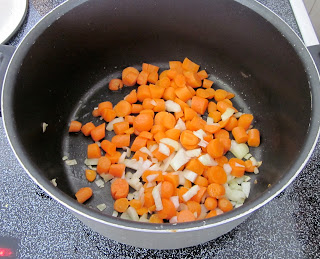 I cut up precooked bacon to add flavor, but not too much grease.  Saute that for a few minutes and then briefly cook the crushed garlic. 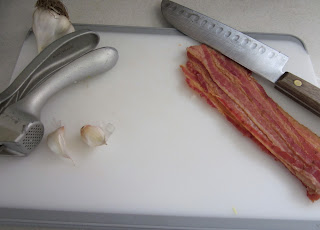 Add the tomatoes, bay leaf and thyme- allow to heat for a minute, 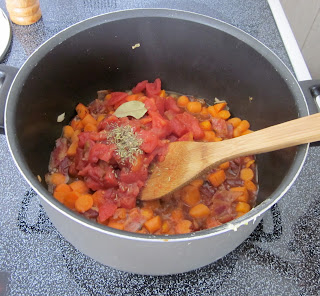 then add the pink lentils!  Green or brown lentils will work, too, but the peachy pink kind are so pretty. 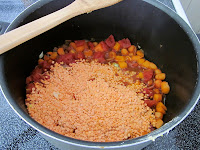 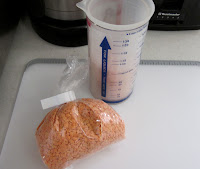 Allow the lentils to cook like this on medium-low, until the vegetables are soft.  The mixture is pretty dry, but don't worry!
Add the chicken broth and water, simmer lentils for another 30 minutes.  Remove the bay leaf.  Take about half of the soup out of the pot and put into a blender, blend and add back to pot. 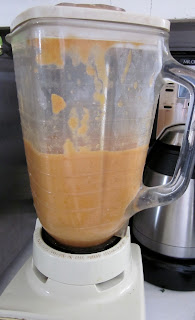 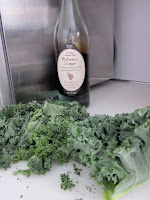 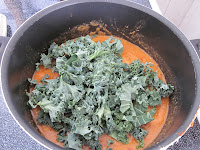 This is so good, I hope you can try it and enjoy.  It reheats really well, and also freezes great.
Hearty Lentil Soup with Spinach (or Kale)
Based on a recipe by America's Test Kitchen
1 large onion, chopped (about 1 1/2 cups)
2 medium carrots, peeled and chopped (about 1 cup)
2 Tablespoons olive oil
4 - 6 slices of precooked bacon (or 3 slices bacon that you cook down)
3 cloves of garlic, crushed
1 can diced tomatoes (14 oz.), drained
1 bay leaf
1/2 tsp. thyme
1 cup of pink (or any color) lentils
1 tsp salt, pepper to taste
5 cups chicken broth or vegetable broth (I used a combo)
1 1/2 cups water
2 tsp. balsamic vinegar
5 ounces of baby spinach (or 2 - 3 large leaves of kale- roughly chopped)
Heat olive oil in large pot- add carrots and onion.  Cook about 2 minutes.  Chop up bacon and add to pan, let saute for 2 - 3 minutes, to crisp bacon.  Add garlic and cook until fragrant- about 30 seconds.  Stir in tomatoes, bay leaf, thyme; heat until fragrant, another 30 seconds.  Stir in lentils, salt and pepper; cover, reduce heat to medium-low, and cook covered, until vegetables are softened, 8 - 10  minutes.  Add broth and water and bring to boil; cover partially and reduce heat to low.  Simmer until lentils are tender, 20 - 30 minutes.  Discard bay leaf.
Puree 3 cups of soup in blender, then return to pot, stir in spinach or kale and vinegar, about 5 minutes or until greens are wilted.
Serves approximately 6.  Calories per serving- about 275.
In addition.....
I did make some oatmeal peanut butter cookies!  I just couldn't do a photo shoot of that!  But here is the result: 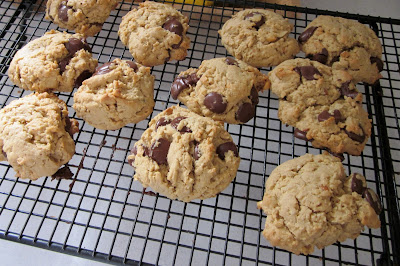 They are great!
Until next time- be a cookie maker  joy giver!  Spread some sunshine.
Posted by debio at 5:04 PM